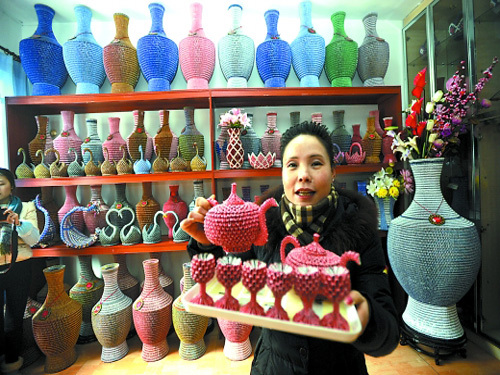 What can be done with old poker cards? Perhaps everyone has a different answer, but at No. 15 Baosheng East Road in Northern Fujian, Tian Juan specifically collected old poker cards and processed them into beautiful decorations such as teapots and vases.

43-year-old Tian Juan lived in No. 15 Baosheng East Road. When she entered her home, she found teapots, vases, and other ornaments on the table. From a distance, these items were almost the same as they were. Touch to discover the mysteries.

Originally these ornaments were made of ordinary playing cards. "These decorations are basically made with old poker that was brought back from friends or relatives."

Talking about why these old playing cards were used as accessories, Tian Juan said frankly: "Initially, it was only to pass the time and it was a pity that the cards were lost."

Three years ago, a friend came to visit the Tianjuan family and gave a vase of handicrafts. At dinner, friends jokingly said that at ordinary times, they are not busy and can do arts and crafts. They can not only pass the time but also can Repair heart.

Feeling that friends were right, Tian Juan deliberately went to the bookstore to purchase a handmade craft book. "I also took the vase from my friend and looked at the method and process of making it."

After that, Tian Juan was like an obsession. When he was idle, he followed the book and folded and produced.

Good patience: spend a few hours in a teapot

Although these card decorations are relatively simple, they are very time-consuming to produce. "We must first fold the cards, cut them, and paste them according to your own needs."

To make a relatively simple teapot, for example, a small teapot requires two decks of cards to be formed. First, the cards are folded and cut into triangles. They are interleaved with each other and inserted from the gap. Finally, the glue is used to paste. It takes 3-4 hours for the production to succeed. time.

â€œLong folding time, sometimes the thumb feels pain.â€ Although sometimes feel tired, but when these decorations made out of the neighbors were praised, Tian Juan was particularly pleased.